If you follow us on Insta, you’ve definitely already heard the news: Our vegan bacon is now featuring in the iconic Veggie Steakhouse from Burger King.

So what’s all this hype about La Vie™️? 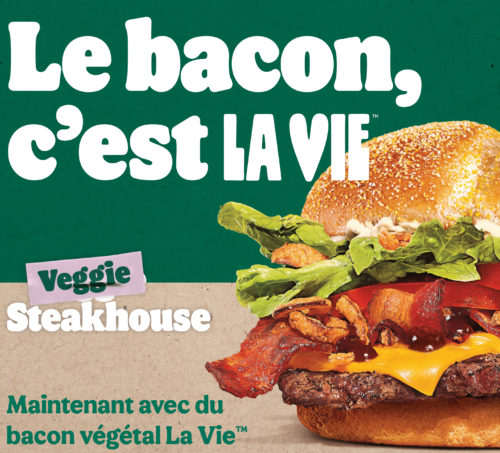 For anyone who missed our scenes outside Burger King HQ, let us recreate it for you: On 5th April, Burger King France revealed a veggie version of what of its iconic burgers, featuring plant-based patties from Le Boucher Végétarien. A pretty big deal, given that this fast food giant is usually all about the meat! Vegan trotters in the door, now there’s something we like to hear…

So, we were a little late to the party because we only noticed May… Better late than never though, right? That’s what we think, too (it’s becoming our motto because we are pretty good at being a bit late). So, we starting laying out the subtle hints for Burger King that adding plant-based bacon in the Veggie Steakhouse was an absolute must… Especially if it was ours, because it’s really, really good (there’s no pretend modesty here at La Vie™️ – if you’ve got it, flaunt it!).

La Vie™️ got to work…

To start with, they mustn’t have seen our messages or calls, opened our letters or heard us shouting from the bottom of their headquarters… Or there’s also the fact that they get a lot of offers, all the time.

But you can’t put La Vie™️ in the corner! Just like Dr Ian Malcolm says in Jurassic Park: La Vie™️ finds a way. And oh boy, did we find one. It started off slowly… A few tweets, a quirky visual, nothing toooo crazy. Alas, we didn’t quite catch their eye. So, we of course had to take things even further. We tried to hypnotise their Community Manager, but they didn’t have much success in helping us with The Mission (getting in touch with the purchasing department). So, we doubled down on our inventiveness (some may say we just got more annoying) to boost our efforts.

So, we gave the good folk over at Le Parisien a call, and they kindly passed on a little message from us in their headlines. That certainly got Burger King’s attention (PSA: we do not necessarily recommend trying this to get your gym crush’s attention) – they even shared the post on LinkedIn, they must like brands with gusto. Our trotters were in the door. Okay, the door may have needed to be widened to let our whole team and our 300 kg muse pass through (Vivi, here’s her Insta btw).

And boom: We parked up outside the Saint-Brice-sous-Forêt Burger King (in the 95 district) in our bright pink van and added bacon into customers’ Veggie Steakhouses. They loooved it. We showed the video to Burger King (who were probably starting to see how persistent… errr, determined we are). Badabing, badaboom, we were able to all sit down for a chat.

Success was in the bag!

A few squiggles (a.k.a. signatures) here, a logistical shake-up there, with a few seductive photos and videos of the vegan bacon burger and bacon sizzling in a pan for good measure, we had everything ready for the début these famous slices of flavoursome goodness into the legendary Veggie Steakhouse. So, on 22 May we were able to announce its arrival, with lovely visuals combining our logos, and even an incredible 10-second TV ad with a super-duper close-up of our vegan bacon. An ad that would go on to be seen by millions of people thanks to lots of GRP (Romain from marketing tried to explain but we didn’t really get it, we pretended so that he’d stop trying, sorry, Romain).

Basically, there was all that and now you can find La Vie™️ vegan bacon in your Veggie Steakhouse. We can’t wait to see your photos and read your comments. And sorry to Burger King for having invaded your Twitter timeline, Instagram feed, LinkedIn, email inbox, voicemail and car park. We can get a little bit carried away… But it’s usually for a good reason!